Hello everyone! Welcome to my blog: CrossGenGaming. My name is Humza and I’ve created this blog as a passion project to aide my dream of getting into to the gaming industry. This blog is mainly about video games of all sorts and eras, but I am also a huge fan of movies, comics, and anime and will discuss those from time to time. My goal is to share my opinions about not only video games I’ve grown to be fond of, but the state of the video game industry itself also. I will talk about which games I am currently playing, I have finished, the genres I loved, famed developers and publishers, upcoming games, and the impact the gaming industry has left on me.

As I get older, my love for the gaming industry keeps growing stronger and stronger. For as long as I can remember, I started gaming when I was four years old when my uncle showed me Mortal Kombat on his Playstation, which absolutely should not be played by children now that I think about it, but my uncle is the MVP for that. Then one day he bought a Nintendo GameCube for my birthday and that ignited the spark. I spent countless hours playing Mario Kart and Super Smash Bros. on that wonderful lunchbox of a console and I knew that I wanted more. Throughout the years I managed to obtain many more consoles, such as the Nintendo Wii, the Xbox 360 (which was my first “big boy” console), then the PlayStation 3, and so much more leading up to my latest console, the Nintendo Switch. Listing out all platforms I’ve obtained would keep us here for quite 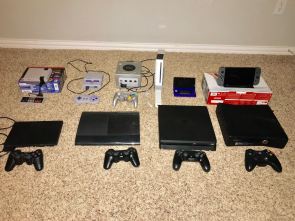 some time, so I ’m just going to show a picture.

I love gaming. I love the countless times I’ve spent with my friends playing Street Fighter and Halo. I adore the engaging stories found in games such as The Last of Us and Metal Gear Solid. I yearn for the feeling of adventure found in my favorite game series: The Legend of Zelda. And instead of listening to the latest pop tune by Taylor Swift, I blast the entire Chrono Trigger soundtrack on my way to work.

Gaming is something that has changed my life for the better. From introducing me to who are now my closest friends through our love for Super Smash Bros., to just giving me new perspectives on my life. It is an industry I want to be apart of whether it is writing about it or even developing games for it, which is ultimately my end goal.